I was fortunate enough to be in Northern Italy in late September 2014. We were in the Veneto, Alto Adige

It was a particularly fortunate time to be in the region. It was harvest time after one of the most difficult vintages in living memory. Ordinarily, the growers can expect 300 days of sunshine every year. In the Valpolicella region of Veneto they had 100 days of rain during the summer. When we were there the weather had improved, and there was some hope that another week or two of hot weather would save some of the harvest, and improve the ripening prospects of the grapes not yet harvested.

It?s tempting to immediately write off the Italian vintage of 2014 – ?oh, they had terrible weather, that was a dreadful year. An awful vintage.? But that would be wrong. The amount of work done, and livelihoods at risk are just too important to summarily dismiss an entire vintage. We learnt a lot when we were there.

We visited six vineyards over two days, and tasted more than 60 wines. We discussed the problems of the vintage with the winemakers, the owners, and the marketing gurus. We were treated royally. Of course, the wines we tasted were wonderful – they?re not going to bring out the rubbish to the folk they hope will sell their wines to Irish winelovers.

Cantina Valpantena
We got to see different types of wineries, and different types of winemaking.First up was a co-op. All the grapes are bought in from local farmers, who get paid according to the weight and quality of the grapes. We were lucky to see a tractor arrive into the yard as we awaited our guide. The tractor arrived and drove on to a weigh bridge, where a type of pneumatic syringe sucked some juice from the grapes. The farmer then drove his tractor to large crusher, sunken at ground level (see the photo below), and tipped his load into the vat. He then returned the twenty yards to the office beside the weigh bridge, where the paperwork was ready for him. Within ten minutes of his arriving at the winery his grapes had been weighed, assessed for quality and were being pressed. And the price for his harvest had been agreed. The efficiency was very impressive.

This particular co-op is geared towards producing good quality wines at affordable prices. Later in our trip we saw the other end of the scale, where the grapes are hand-harvested into small (ish) plastic crates, designed to ensure the weight of the grapes does not crush those on the bottom of the crate. Tractors are different, and we could see plenty of grape juice flowing from the bottom of the tractor into the crusher. I?m no oenologist, but I?m guessing that this method is fine provided there is no great distance between the vineyard and the grapes? final destination as berries. Otherwise, oxygen will start to work its evil, and the juice will become oxidised. So, speed is of the essence, and while we didn?t see the next step, I?m guessing some small amounts of sulphur were quickly added to protect the juice after pressing. Nothing wrong with that – every bottle of wine in the world contains sulphites (there?s another article here somewhere about all that!).

So, to stand out from the crowd, and make very good wine from large harvests coming from various growers, this co-op needs a top-class winemaker. And they have one – he?s the good-looking one in the photo below. 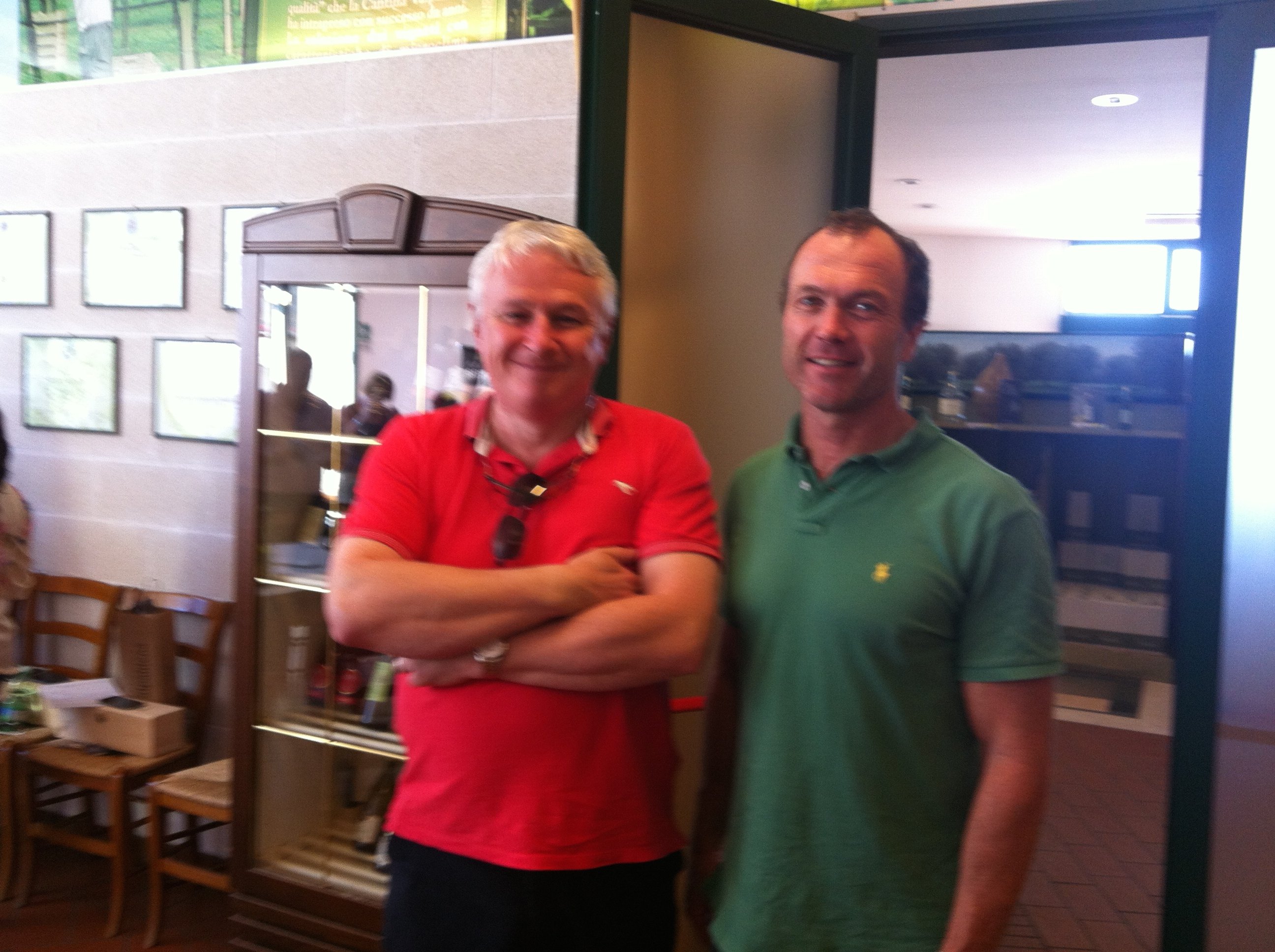 Matt Thompson is his name, and he?s quite famous in the world of wine. Originally from New Zealand, he travels the world working as a consultant to wineries all over the world, in particular New Zealand, Italy and Chile.

We had dinner with Matt and his partner the night before we visited the winery, and he was very generous with his knowledge. He was kind enough to introduce me to brouglio, a kind of Italian Jaegermeister.

Matt has a great team around him, and he is in demand as a winemaker to the point where, the previous year, he was on 170 flights. That?s a lot of air-miles.

Cantina Valpantena is the name of the winery/co-op, and they make wine for Alpha Zeta, and Torres del Falasco, among others. It has 300 growers, and the vineyards are set in the hills outside Verona. In Greek, Valpantena means ?The Valley of the Gods?, but local folklore has changed this to mean ?The Valley of All Wines?. An indication of how good the whole system works at Valpantena is the fact that they can produce a very good Ripassa Della Valpolicella that we can sell for under ?20.

Pieropan
Next up was the town of Soave, and the Pieropan winery. The town itself is a stunningly beautiful walled town, and the Pieropan winery is on what seemed to me to be the main street – a narrow, hilly street with lots of twists and turns. A narrow gate – just wide enough to allow entrance to a tractor – and a sign on the wall outside was all there was to indicate this was not just another house on the street. Mind you, the current owners live above the winery, so in one sense it is another house on the street.

Again, a tractor arrived as we waited for our host. You can see the difference in size here. These vineyards are owned by the Pieropan family, and the tractor pulled three containers (pictured below), and tipped them into the crusher, which was located just inside the gate. No need for weighing, or checking quality (that is done in the vineyard).

When our host, Andrea Pieropan (the good-looking one on the left this time), arrived, he immediately brought us up onto the roof of the winery, where the views of the surrounding Soave Classico region are stunning. The vineyards aren?t obvious from this distance, but in the first photo the Soave Classico vineyards are visible in the distance. The other photo is actually of a vineyard, almost hidden , where the grapes for the top Pieropan wine, La Rocca, are grown. It is a stunning wine, which I think is reminiscent of a very good Burgundy and, coming in around the ?30 mark, is wonderful value given the quality. 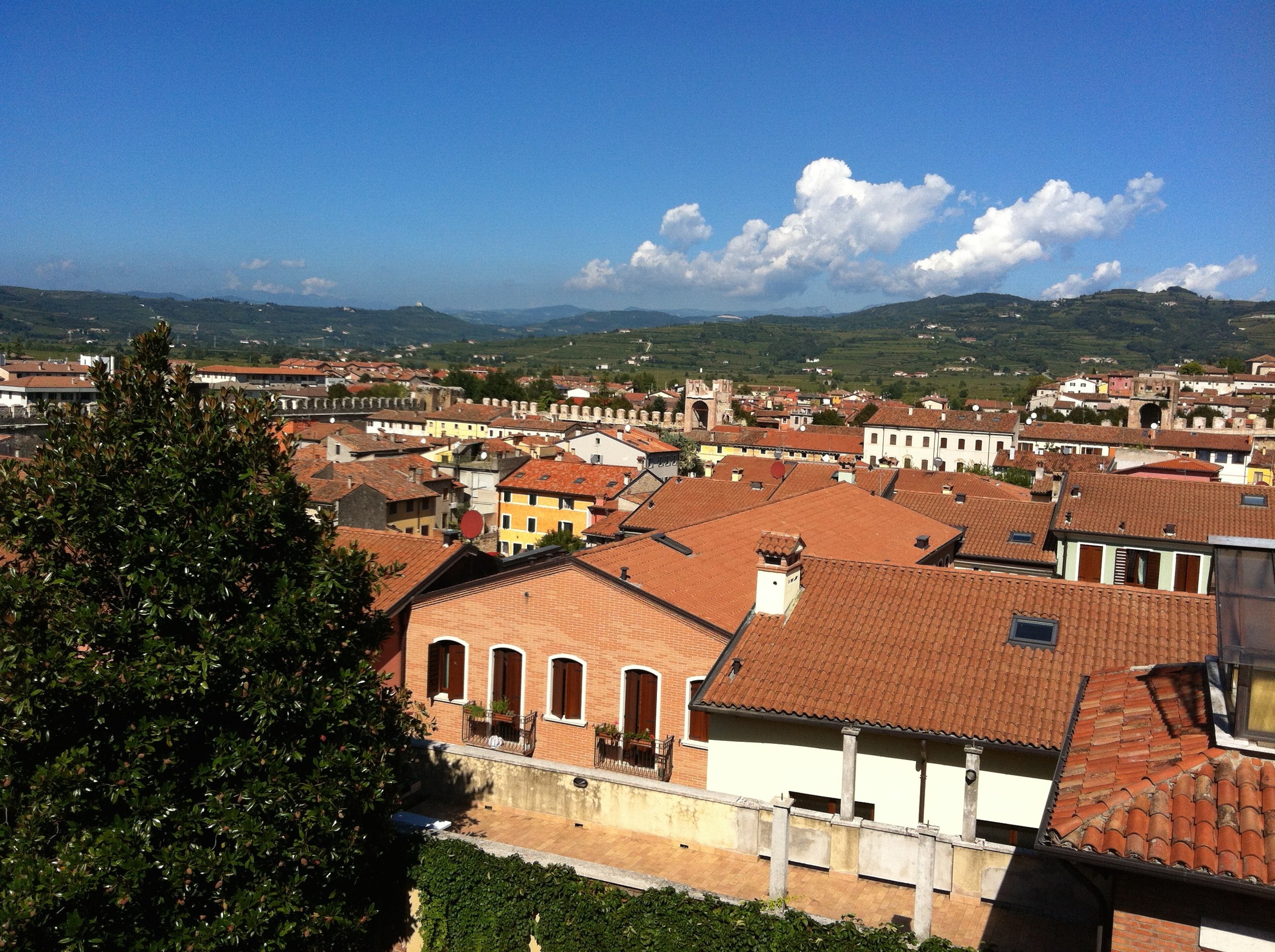 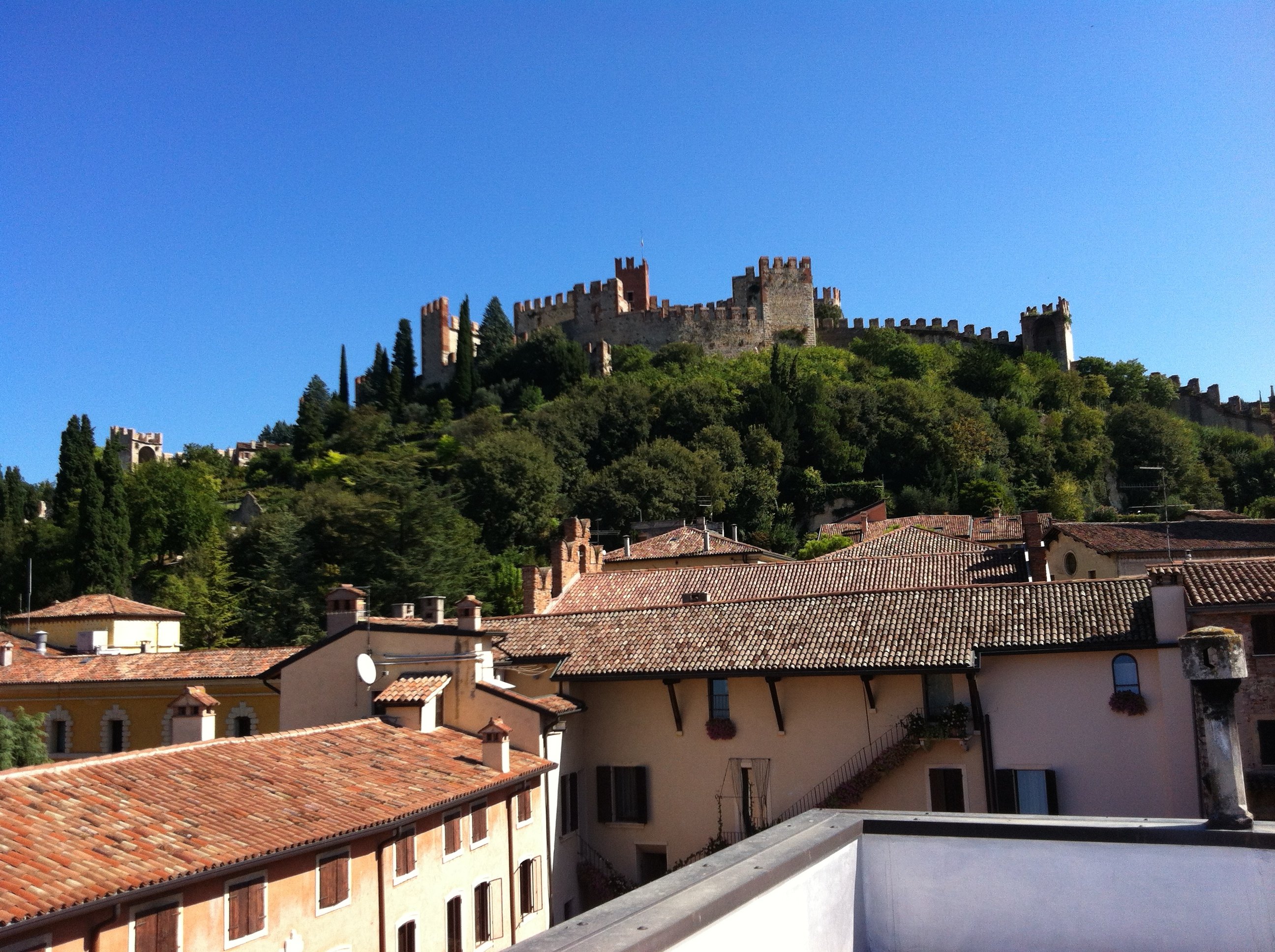 The Pieropans are traditionalists. They have no time at all for stainless steel, with most of their wine fermented and stored in cement tanks. The only wine that receives oak treatment is the La Roca, giving it a rounded creaminess.

Recently, the producers of Soave Classico lobbied successfully for a change in the law that allowed them to use screw caps on their bottles without having to drop the term ?Classico?. This contrasts with the producers of Valpolicella Classico (see Allegrini below), who can only use cork closures on their Classico wines.

The Pieropan Soave Classico is crisp, dry and fruity wine, made from a blend of Garganega (85%) and Trebbiano di Soave (15%) grapes. The 2013 that we tasted had a touch of mineralogy, with flavours of peach and melon. To quote Robert parker – ?A fantastic value wine? No one comes close to giving a more graceful and delicate voice to the workhorse Garganega grape?.

All of the wines we tasted from Pieropan were excellent, but the standout wine was the 2012 La Rocca, which is made from 100% Garganega, from a single vineyard, in the photo above. It reminded me of a good Burgundy. It is the only Pieropan wine that gets oak treatment. A real gem.

Allegrini – Valpolicella Region of The Veneto
We went from Soave to the Veneto region, where the best Valpolicella grapes are grown near the shores of Lake Garda. The lake plays an important role in the development of the grapes during the growing season, with the cooling breezes from the lake helping to lengthen the ripening process and concentrate the flavours.

Corvina is the important grape in Valpolicella, with support coming from Corvinone, Rondinella and the best-forgotten Molinara, which was delisted as an obligatory component in 2003.

Valpolicella comes in three styles – the basic Valpolicella, Ripassa della Valpolicella and Amarone? della Valpolicella. Amarone is made from dried grapes (wine made in this way in Italy is known as Passimento in style). The grapes were traditionally dried in the roofs of the vineyard buildings, on large trays. The photo below is the Pieropan drying room which, although it is in Soave, has a vineyard in Valpolicella. Most vineyards making Amarone now have large drying rooms with industrial air blowers to both help the drying process and lessen the risk of disease. 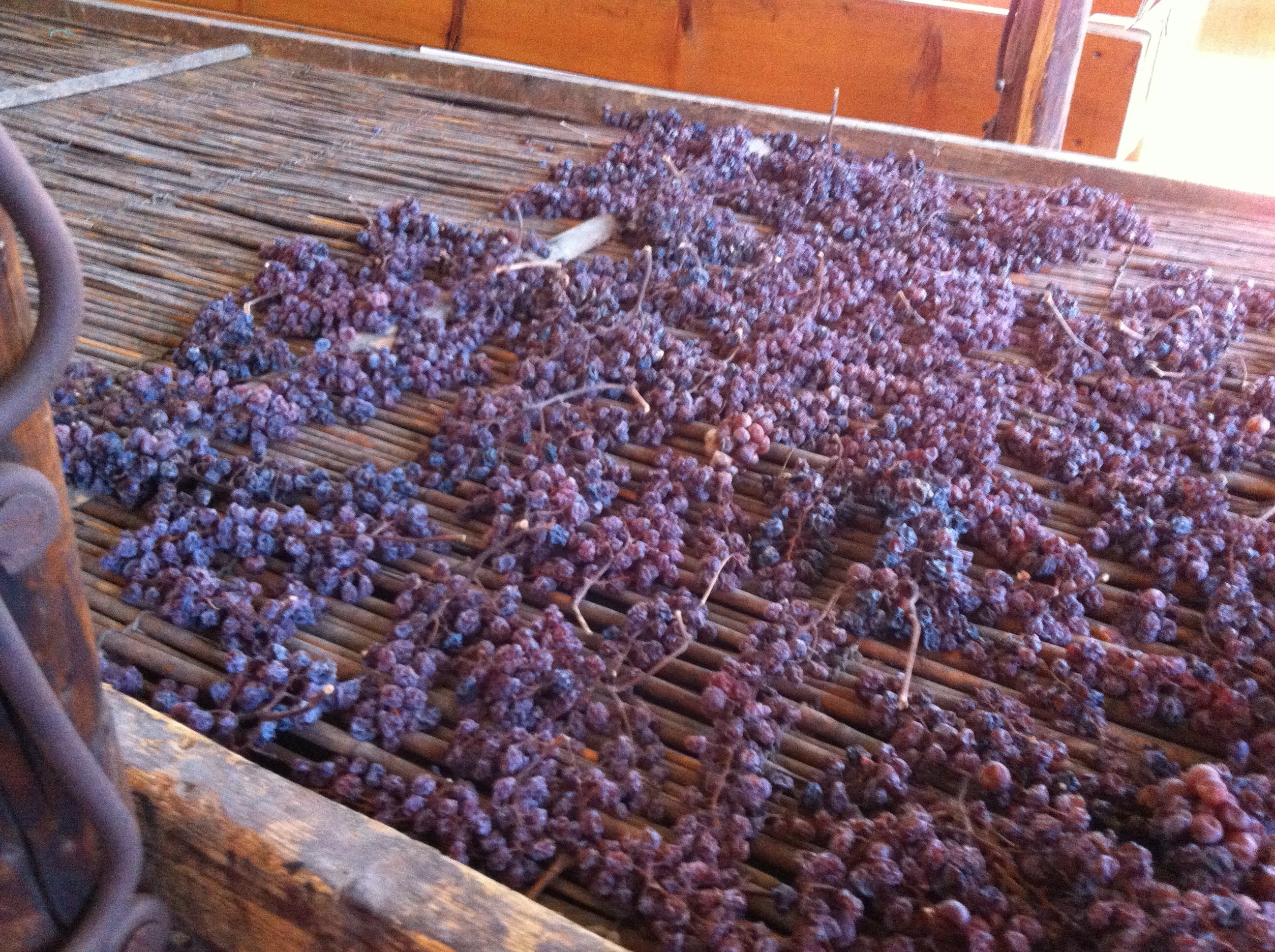 Ripassa is often called a ?Baby? Amarone. When the Amarone has been made, the grape skins are taken out, and the regular Valpolicella is passed through the skins for a second fermentation. Ripassa means ?passed through?, and the process adds body and structure to the basic wine, and also some alcohol.

The Allegrini vineyards are most impressive. They overlook Lake garda, and are amongst the best vineyards in the Veneto. Their top wine, La Poja, is made from 100% Corvina, and was the first Valpolicella to be made this way. It is a single-vineyard wine, coming from their best vineyard. At over ?100 a bottle, it would want to be good, but boy is it good.

The Allegrini family have been making wine in the region for generations, and have been involved in the community, and in agriculture in the area since the 16th century. Bit of history there so. And if, by any chance, you?re looking for a nice getaway for a break with a few friends, the? chateau, for want of a better word, is available for hire. And quite impressive it is?. 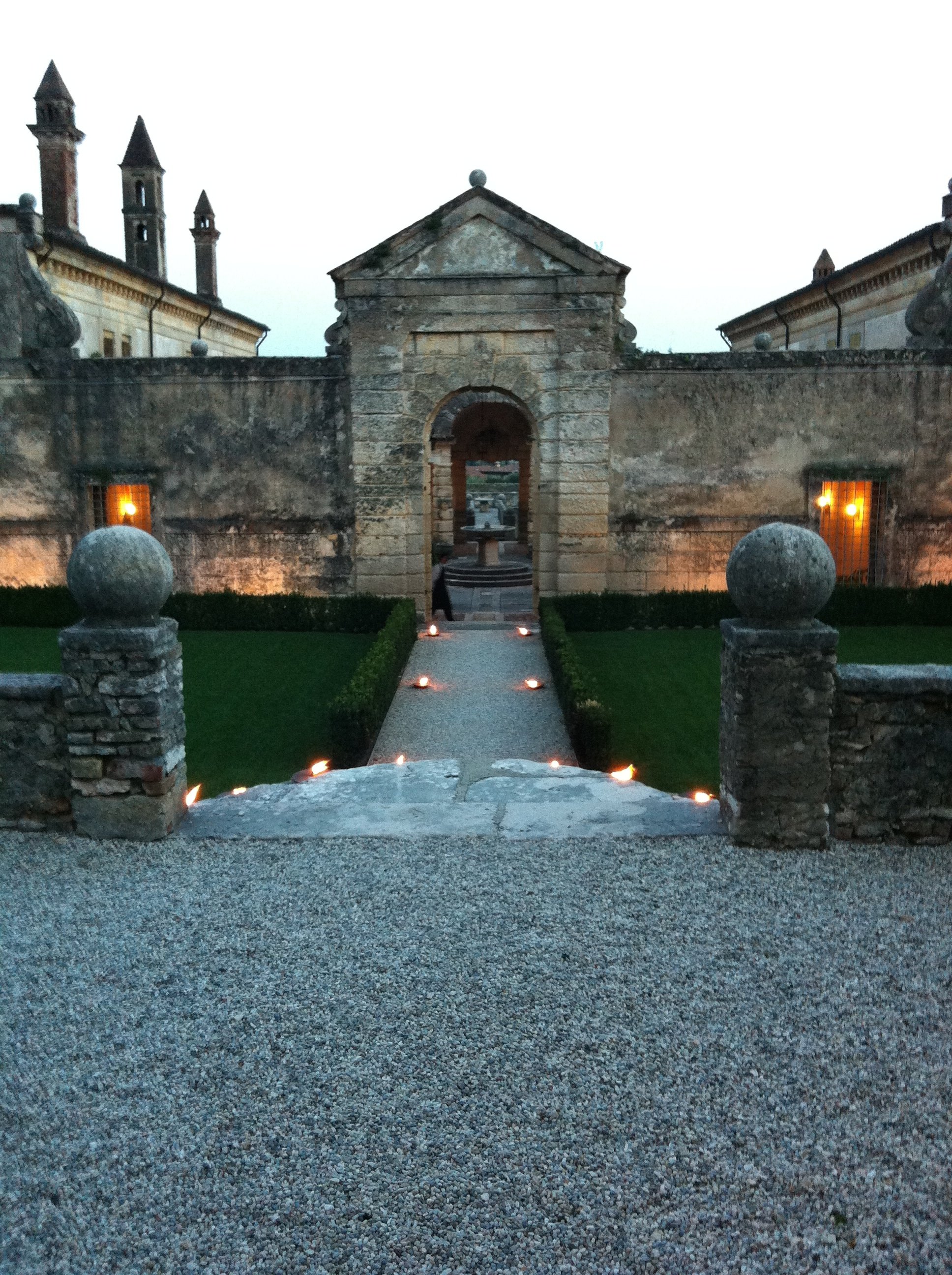 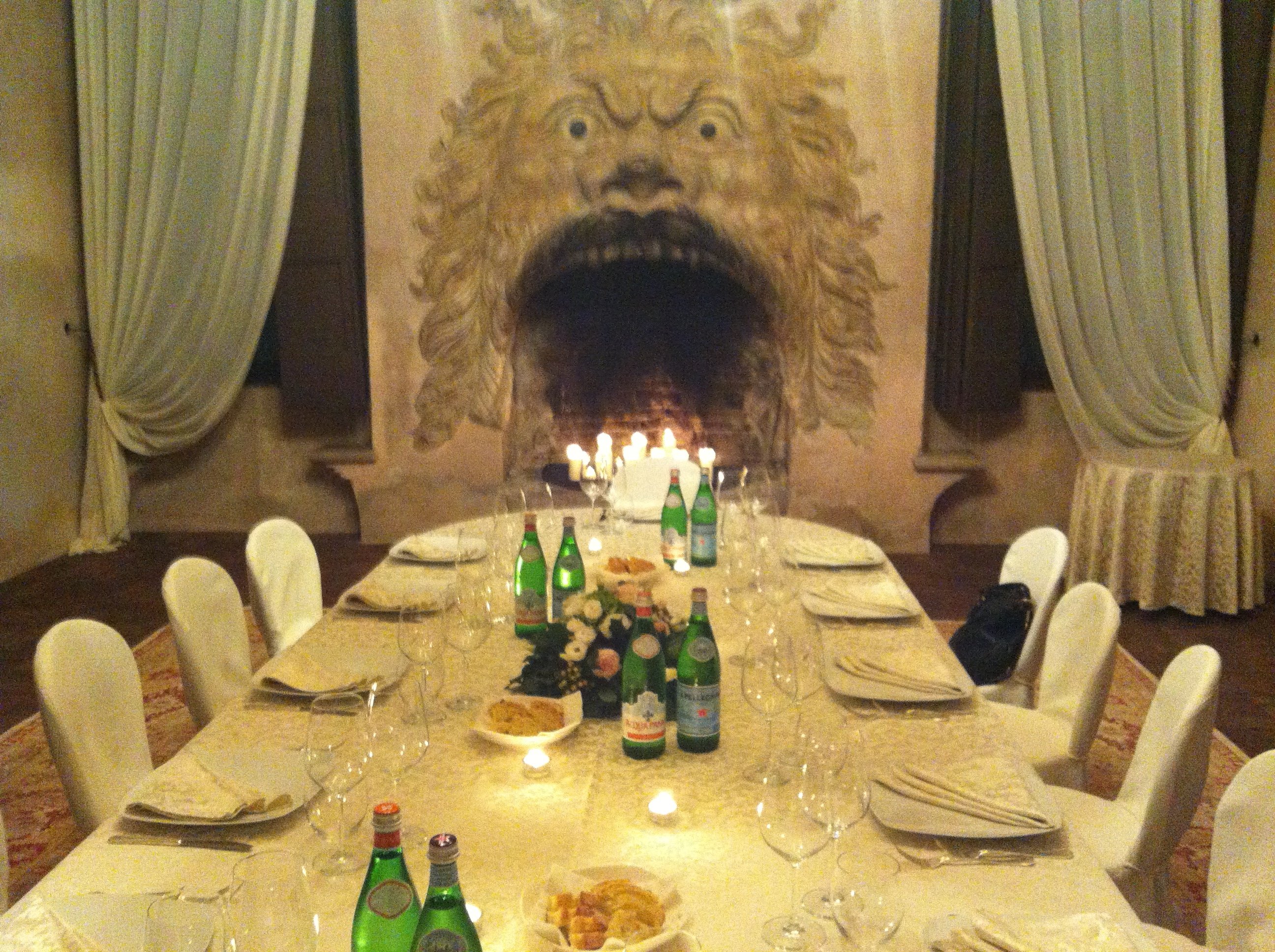 Believe me, these photos don?t do it justice.

Franz Haas
Vineyards tend to be beautiful places. However, some are in the most stunning locations, and the combination of a beautiful vineyard in a special setting can leave you awestruck. The Franz Haas winery is such a place, as are their vineyards. They are located in the Dolomites, in the Alto-Adige region, with a view across the valley to the Alps. Austria is a few miles off to the right. This is the view from the door of the winery. They?re the Alps. 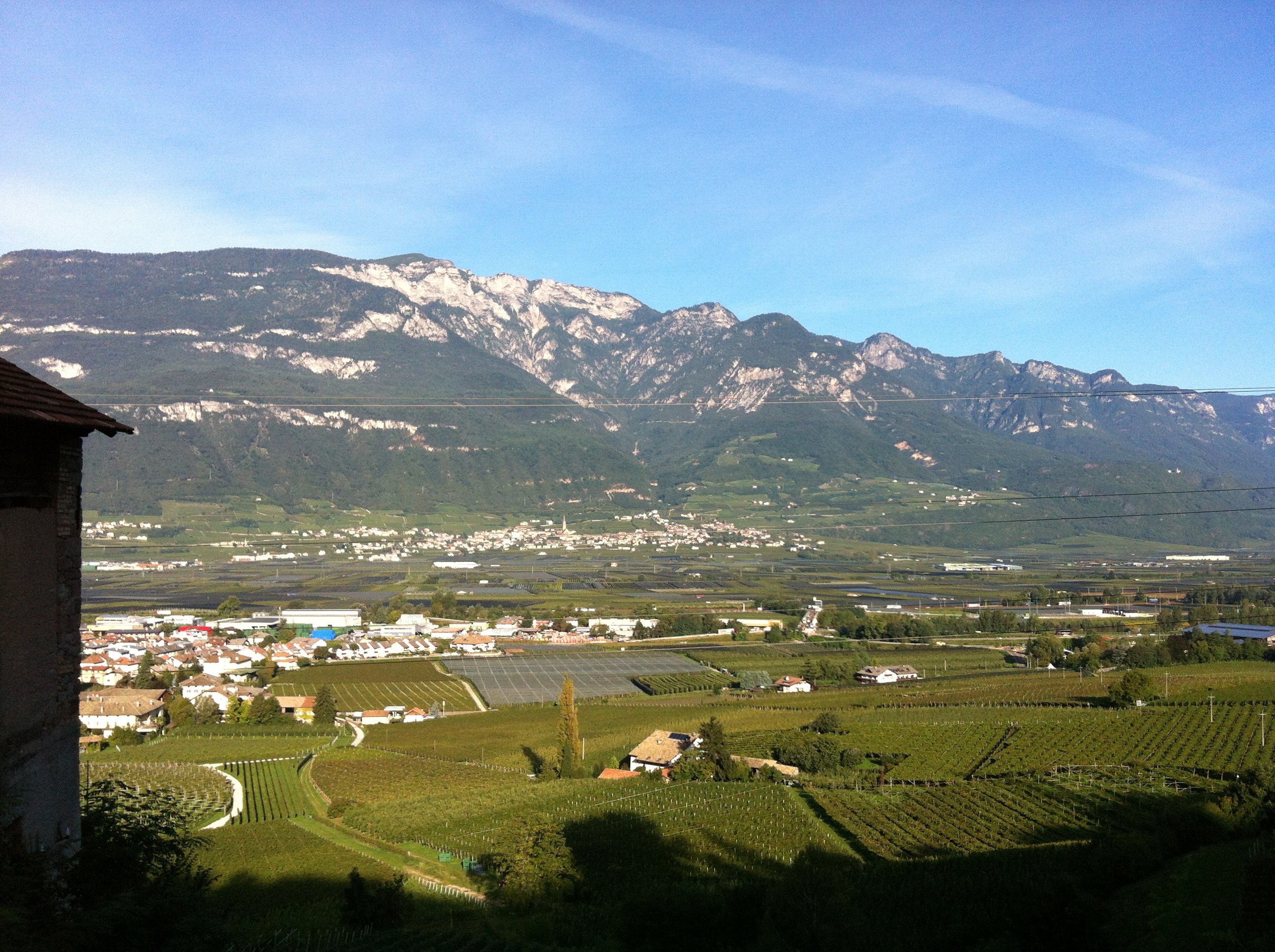 If you ever want to taste a Pinot Grigio as it was meant to be, try one of Franz Haas?s. Since it became very popular, it has become a bit bland. This always happens with wines as they become more popular. Ubiquitous can mean over-produced and lacking in quality. Not in this case, though, and you can taste why Pinto Grigio became popular in the first place. 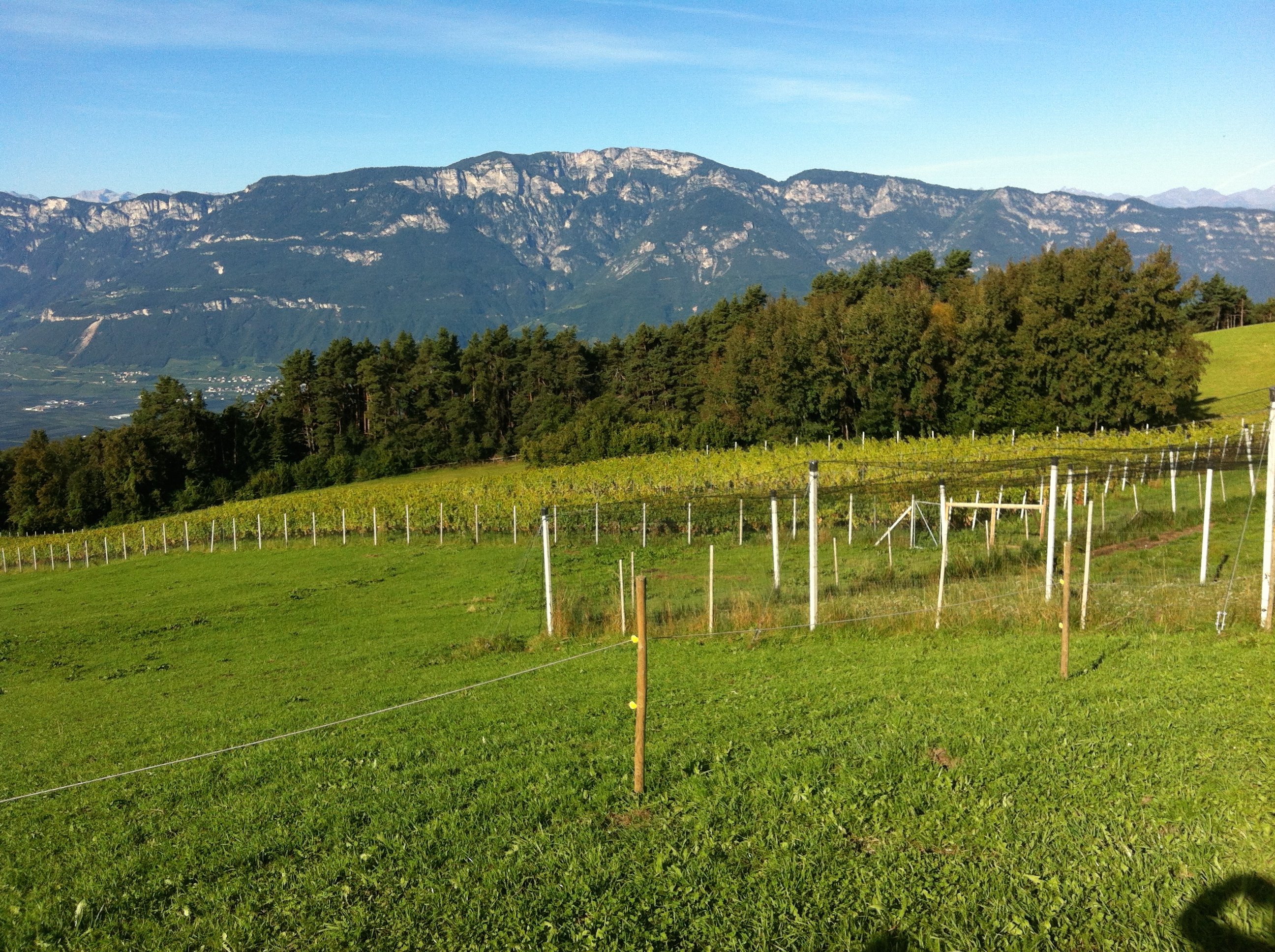 The photo above is of one of the highest commercial vineyards in the Alto-Adige region, where Franz grows Riesling. It is a planting of Riesling. There are some experimental vineyards at higher altitudes, but this planting has been a successful experiment for Franz. the land around here is not cheap – about ?1M a hectare, and the area in the photo covered with vines is about half a hectare. the wine would want to be good.

To summarise, it was a very informative visit to Northern Italy. A few days to savour the wines and hospitality of people that give a damn about how they make their wines.